Robert F. Starbuck died a hero in Vietnam on February 4, 1967.  Only 25, he was a sergeant of an elite RECON Marine detachment holding a hill against overwhelming odds.  He was awarded the Silver Star, one of our armed forces’ highest decorations for bravery.

Bob and I were football teammates, high school classmates, and friends. He was very likeable and decent.  His death must have been shattering to his family. When I learned, much later than 1967, of his death, I pondered what I could do in his memory. Moving back to Walden, I found that our high school, Valley Central, held an annual awards ceremony for members of the athletic teams. I established the Robert F. Starbuck Captain’s Award in his honor, going each year to the captain of the football team, in recognition of Bob’s leadership, courage, strength, and service to our country.

Recently, a memorial ceremony was held in honor of our local servicemen who died. There is never enough we can do to thank such people.

The story of Bob’s last battle is one of those in the book, Honor the Warrior: The United States Marine Corps in Vietnam, by William L. Myers, published in 2000. Mr. Myers dedicates his book to the nearly 15,000 members of the U.S. Marine Corps who died in Viet Nam. His dedication includes this excerpt from a poem by Laurence Binyon:

But they shall not grow old

As we who are left grow old.

Age will not weary them, nor the years condemn,

We will remember them.

REVIEW of THE JOY OF CHEMISTRY

Review of THE JOY OF CHEMISTRY: A Quick Study Guide for Kids and Beginners to Learn Chemistry 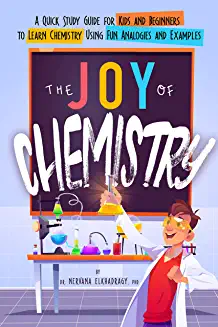 This charming little book is intended to introduce kids to chemistry. It does so partly by anthropomorphizing atoms in a fashion sometimes cuddly, sometimes wrong. Chapter 1 sets the tone, “How Are Particles Similar to People?” The book’s title is appealing, as are the chapter titles, despite their simplification.

For example, the answer to a Chapter 2 question, “Which one is easier to smell from a distance, hot or iced coffee?” is given as, “Diffusion occurs faster at a warmer temperature because particles have more kinetic energy, and thus move faster. That’s why we all enjoy the smell of freshly brewed coffee.” More nearly correct is that the temperature of the hot coffee produces a higher vapor pressure in the aromatic constituents, which then diffuse in the air at the same rate due to the air temperature, as do the aromatic components from cool coffee. “Freshly brewed coffee” smells better than stale coffee for other reasons as well.

Even so, questions and answers at the end of each chapter are generally a plus for reinforcing the lessons. A shortcoming is that each answer is introduced with an exclamation about how well the student has already answered it, such as, “Nice explanation!” Condescending?

Dr. Elkhadragy’s making particles into people requires us to extend a poetic license to the author for sentences such as, “Particles are like individuals. They think and make wise decisions.” Too cute to be true.

Similarly, drawing an analogy between the solar system and an atom produces “electrons are tiny particles that orbit the nucleus at a very high speed.” Too simple by far. The discussion later becomes more sophisticated with the introduction of the concept of electron shells. All in all, the description of the atom is mostly true and informative.

Next, we have compounds, “in which two or more elements decide to make a deal, hold a contract, and stay together.” Too folksy for my taste. I awaited details of the divorce.

A former science teacher myself, I enjoyed the description of the periodic table, not an easy thing to describe clearly and succinctly. One can easily remember that the specific groups of atoms had particular characteristics, like people in certain neighborhoods.

The book has an excellent discussion of the relative reactivity of the various kinds (groups) of elements.

It is easier to understand compound formation once one knows that atoms have “goals,” one of which (except for hydrogen and lithium) is to have eight electrons in the outermost shell. Group VII elements will tend to gain single electrons and become negative ions. Groups I, II, and III metals tend to give up electrons and become positive ions. Figure 6 has an atom preparing part with an electron.

Ionic and covalent bonding are well described once one gets past the idea of an atom’s “wanting.”

In sum, this well-written and well-edited book makes a painless introduction to essential aspects of chemistry. However, before using it in one’s classroom, consider how suited it is to the age of one’s students. Perhaps middle school students are the appropriate cohort.

P.S. The author has informed me that an upcoming revision will be addressing some of these concerns, in which case I will likely be happy to add another star to this review.

Posted by Douglas Winslow Cooper, Ph.D. at 4:11 AM No comments:

Where We Are So Far

Neither the natural emergence nor the lab escape hypothesis can yet be ruled out. There is still no direct evidence for either. So no definitive conclusion can be reached.

That said, the available evidence leans more strongly in one direction than the other. Readers will form their own opinion. But it seems to me that proponents of lab escape can explain all the available facts about SARS2 considerably more easily than can those who favor natural emergence.

It’s documented that researchers at the Wuhan Institute of Virology were doing gain-of-function experiments designed to make coronaviruses infect human cells and humanized mice. This is exactly the kind of experiment from which a SARS2-like virus could have emerged. The researchers were not vaccinated against the viruses under study, and they were working in the minimal safety conditions of a BSL2 laboratory. So escape of a virus would not be at all surprising. In all of China, the pandemic broke out on the doorstep of the Wuhan institute. The virus was already well adapted to humans, as expected for a virus grown in humanized mice. It possessed an unusual enhancement, a furin cleavage site, which is not possessed by any other known SARS-related beta-coronavirus, and this site included a double arginine codon also unknown among beta-coronaviruses. What more evidence could you want, aside from the presently unobtainable lab records documenting SARS2’s creation?

Proponents of natural emergence have a rather harder story to tell. The plausibility of their case rests on a single surmise, the expected parallel between the emergence of SARS2 and that of SARS1 and MERS. But none of the evidence expected in support of such a parallel history has yet emerged. No one has found the bat population that was the source of SARS2, if indeed it ever infected bats. No intermediate host has presented itself, despite an intensive search by Chinese authorities that included the testing of 80,000 animals. There is no evidence of the virus making multiple independent jumps from its intermediate host to people, as both the SARS1 and MERS viruses did. There is no evidence from hospital surveillance records of the epidemic gathering strength in the population as the virus evolved. There is no explanation of why a natural epidemic should break out in Wuhan and nowhere else. There is no good explanation of how the virus acquired its furin cleavage site, which no other SARS-related beta-coronavirus possesses, nor why the site is composed of human-preferred codons. The natural emergence theory battles a bristling array of implausibilities.

To which I would add that regardless of the origin, the Chinese Communist Party is responsible for having allowed it to be transmitted worldwide while preventing its transmission within China, an act of biological warfare.

Posted by Douglas Winslow Cooper, Ph.D. at 7:56 AM No comments:

Days before Tina was sent home from the hospital, I had THE TALK with two sets of doctors et al.: Tina was wholly unresponsive though clearly alive, and at this time, 45 days after her multiple strokes, there was little hope of cognitive improvement. "What do you want us to do?" The subtext was: is this life worth saving, or shall we minimize our efforts?

I explained to both sets that Tina had recovered unexpectedly 17years ago when the choice was "home or hospice?" and again a few years ago when she was returned to us in "a vegetative state," later to recover some ability to communicate and appreciate, the classic "Come-back Kid." Though at 77,  Tina is not a kid, she is a person with possibly years of life ahead.

I instructed the doctors to do what they could medically to save her life and protect her from pain, and we would resume around-the-clock nursing for her at home.

She returned home earlier this week, essentially unresponsive, virtually comatose, and we wondered what would result. For a grim few days, we saw a lot of sleeping, some looking around pointlessly, no response to any touch or sound.

Yesterday, that changed. Nurse Mary Wilkinson asked her, "Are you feeling better?" Tina gave a small, definite nod! This was repeated several times.

Subsequently, Nurses Mary and Heather Geib and I have asked Tina simple questions like, "Are you warm enough?" and have gotten small but definite nodding motions of her head and some change in facial expression, even a hint of a smile.

She even mouthed "hi" when encouraged to do so by Heather.
Also new, she is moving her head to view various parts of the room.
This was not the case just days ago.
We think that successful care of her physical health will be accompanied by some continued improvement of her cognition and communication. We are thrilled.
Our prayerful watch reminded me of a Frost poem, "Neither Far Out Nor in Deep,"
The people along the sandAll turn and look one way.They turn their back on the land.They look at the sea all day.As long as it takes to passA ship keeps raising its hull;The wetter ground like glassReflects a standing gull.The land may vary more;But wherever the truth may be---The water comes ashore,And the people look at the sea.They cannot look out far.They cannot look in deep.But when was that ever a barTo any watch they keep?
We have a limited view of our mysterious life, yet we persist in hoping,
and sometimes that hope is rewarded, as is prayer.
Posted by Douglas Winslow Cooper, Ph.D. at 6:08 AM No comments: