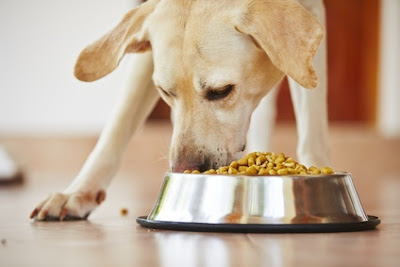 “Your dog is too fat,” our veterinarian told me…well, stated a bit more diplomatically than that.

Shocked, I asked him how one could tell, “You should see she has a waist.” True, by that standard, Colette, our part-Chow, part-Retriever rescued dog was a bit chubby, about ten pounds (10 lb) heavier than she had been when we got her at age three, back in June of 2014, two years earlier. She was thick around the middle, not thin.

We had bonded the day we got her, with this usually shy dog putting her head on my thigh as I drove her back from the dog van, piloted by Tennesseans who rescued her from the dog pound.

We didn’t want her to go hungry at home.

We fed her, as recommended, two cups of dry food, one of canned, a total of about 1000 Calories per day (Cal/day), half that of a typical human. She would not accept treats offered to her, so her intake was well controlled.

Unfortunately, she was to join the nearly 60% of dogs and cats who are overweight, according to the American Animal Hospital Association. The implications are the same as for humans. We are “killing our pets with kindness,” by over-feeding them.

Two simple mathematical relationships are keys to weight control, for pets and people.

Averaged over a few months, our weight tends to be given by the following relationship:

My quadriplegic wife gets 1300 Cal/day and for her, A=10, leading to an average weight of 130 lb. More active people will have larger values of A.

The beauty of the relationship is that you do not even need to know your activity level, A, a mix of resting metabolism and energy expended in motion. You can decrease Calorie consumption and predict its impact on weight, using a second relationship.

The Caloric value of a pound of fat, on us or in our food, is:

Eventually, the weight loss stops, and you reach your new long-term average.

If you change your eating habits by just 200 Cal/day, and if you usually consume 2000 Cal/day, our first relationship tells us you can expect to change your long-term average weight to 90% of what it is now, because your caloric intake will be 90% of what it was, a 10% decrease. For me when I was at 160 lb, that would mean

Colette and I Go on a Diet

So, to get to be approximately 10% less heavy in the long-run, we need to cut our average Calorie intake by 10%. Often this is easier than trying to get a significant, sustained increase in our activity levels, A.

For example, for me to walk a mile in 20 minutes would consume only about 80 Cal, (https://www.verywell.com/walking-Calories-burned-by-miles-3887154), which is contained in one slice of bread.  My daily Calorie expenditure is probably 2000. Increasing that expenditure 10% would be 200 Calories, 2.5 miles of added walking, 2.5 slices of bread.

At about the same time Colette joined us, I found I weighed 160 lb, looking a big chubby. That continued about half a year; then, in May 2015, I decided not to go on a diet but to change my eating habits permanently, because a diet would produce only a temporary change in weight.

The major change I made was to cut out starchy food, such as baked goods, potatoes, rice; breakfast became an instant breakfast drink with an added scoop of dry non-fat milk, and I had another such drink in the evening. Lunch was salad, cheese or meat, and juice. Dinner was much like lunch, with more meat, and salad or veggies and juice. The rather high protein intake led to my rarely feeling hungry, and if I did, I had some nuts.

To reduce Colette’s pudge, I shifted her from about 1000 Cal/day to approximately 600 Cal/day, a rather drastic cut. I had intended to cut it by 20% but miscalculated.  On the next vet visit, her weight had dropped to about 52 lbs, and she looked quite good, so I restored some of her calories, 1.5 cups of
dry food and a cup of canned food, about 800 Cal/day, where it stands now.

She may still be losing a bit of weight, but not much.

It’s Easier with a Dog

Granted, it is easier to control a dog’s diet and exercise than our own. Colette did not need Jenny Craig, Weight Watchers, Atkins, NutriSystem, with their enticing prospects of get-slim-quick yummy meals. I provided her with disciplined resolution. Her daily exercise was rarely varied, too, making it easy to compare one diet with the next.