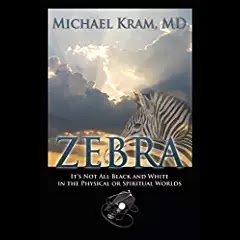 What Michael Kram, MD, does here is describe his journey from his first-class medical education and outstanding career as a gastroenterologist through a Topsy-turvy, scary roller-coaster of a ride of conflicting medical diagnoses of his eventually disabling illness, a trip ending in a resolution of the ambiguities of his condition, a struggle that gave him greater insight into the strengths and weaknesses of the current system of medical care in America. As was said of another author whose views were sculpted by adversity, Dr. Kram has not returned from Hell empty-handed.

Dr. Kram’s story is compelling, and its themes are important:
• the vastness of medical information that can obscure the answer to a rare disorder, the zebra that is not the horse doctors are trained to see and to treat;
• the difficult role of an MD, in preparation and the demands of his calling;
• the pride that prevents such experts from acknowledging ignorance, and the legal pressures not to do so;
• the tragedy of the loss of one’s ability to practice one’s profession, especially when it is a calling;
• the value of being in the inner circle when trying to get expert medical help, “whom you know;”
• the need to be your own medical advocate;
• the importance of family and marriage;
• the role of God and faith in our lives;
• the increasing depersonalization of medical care, due to its take-over by larger and larger institutions, often due to pressures from government and insurance agencies.

Readers unfamiliar with Orthodox Jewry will find much that is new to them here, much to admire. Fortunately, an extensive glossary gives the meanings of many of the special terms used in the Jewish religion and in the medical profession. Doctors and their families will recognize many situations characteristic of the medical profession. Educated laymen will come to understand that giving up the care that the medical profession has traditionally provided in order to get treatment by institutional employees, rather than dedicated personal physicians, is frequently a bad bargain for doctors and patients.

Recently, Dr. Gerard J. Gianoli wrote (in a July 2016 newsletter for the AAPS, the Association of American Physicians & Surgeons) a defense of private medical practice as the breeding ground for many medical improvements and innovations; he noted: Throughout the last 70 years, the U.S. has been the greatest mover and shaker in the world of medicine. Most major medical innovations have either been born or significantly developed here. And, many of the major innovations have come from small private practices—certainly not from the government. Innovative changes do not come from out of our universities—they come from individuals who work at our universities. However, true radical, transformative innovations have often come from private practices. Dr. Gianoli cited many examples, including those from his field of specialization, otolaryngology.

The Industrial Revolution swiftly brought the assembly line and its advantages: higher productivity, greater speed, more uniformity, reduced costs. In the automobile industry, we got the Model T Ford, which you could buy in any color as long as it was black. Competition soon developed, with many manufacturers, many models, many colors, much consumer choice, and with a wide range of prices. Current trends in regulation of the medical profession favor assembly-line treatment, with the personal care of the private practice physician shunted to “boutique” medical practices. For a while, some consumers and some doctors can still participate in the kind of personalized medicine they prefer, but if physicians and the public do not protest the decisions of those who are in positions of power and who arrogate to themselves the right to determine health care policy, even those exceptions will disappear.

If this book helps promote a profound re-assessment of the current trajectory of the management of medical care in America, it will have made a major contribution to the future well-being of patients and physicians alike. If Dr. Kram’s observations are heeded, the medical profession, with the help of concerned consumers and informed taxpayers, will have started to heal itself…at last.

I had the privilege to read an advance review copy of Zebra, and much of these, my comments, became part of the book's Foreward.

This is my review for Amazon of Dr. Kram's compelling book, Zebra: It's Not All Black and White in the Physical or Spiritual Worlds.
Posted by Douglas Winslow Cooper, Ph.D. at 3:02 PM