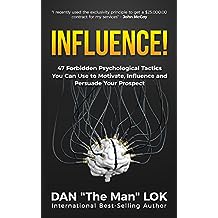 Businessman Dan Lok has written a succinct and helpful summary of 47 tactics advertisers use to get us to purchase their goods and services.  Many of these you will recognize, but some may be new to you. for each "forbidden psychological tactic" (and "forbidden" may be a 48th), Lok describes it, gives an example, explains how it works.

Granted, there's some overlap among these: "popularity," "conformity," and the "herd mentality" are close, and "superiority"  can mean any of several comparisons, "logic and "rationale" are kin, too. But you won't cavil about whether there are really 47 or 50 or 43 tactics. Rather, you will be glad to absorb the insights of this successful millionaire marketeer.

Here's one of Lok's 47; it's #37, BE A CHEERLEADER.  He starts by quoting Henry Chester, "Enthusiasm is the greatest asset in the world. It beats money and power and influence. It is no more or less than faith in action." Who is Henry Chester? I looked him up: he was a nineteenth century "public servant." Well, I like what he wrote, as did Dale Carnegie, a "famous motivator" as Lok describes him.

The book was a bargain. Don't miss it. You can use these tactics or recognize when they are being used on you!

Available from Amazon as a Kindle ebook: