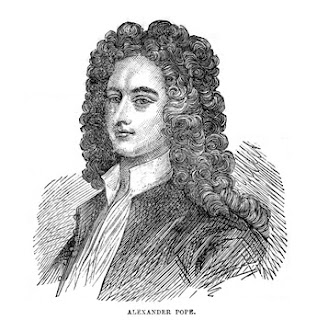 I wish that I could travel back some centuries in time,
When English-speaking poets wrote their poetry in rhyme.

A writer I admire much is Alexander Pope,
Who translated the Iliad and made that epic lope.

Pope wrote heroic couplets, ten beats in every line.
His model was John Dryden who used the same design.

His parents both were Catholics.  In England in that day
Not to be a Protestant foresaw a rocky way.

Restricted from the Public Schools and University,
Through both his pluck and fortitude he trumped adversity.

Pope's early formal learning was spotty at its best,
He mastered Latin, Greek, Italian, French, and all the rest.

An Oxbridge education was a benefit Pope lacked;
He compensated by becoming an autodidact.

You'd think his life was hard enough but something even worse
Befell the lad: from milk, they say, he got the TB curse.

But not the sort that strikes the lungs and makes one cough and hack;
No, his TB attacked his spine and left him a hunchback.

He measured four feet six in height when standing up erect,
His want of stature overcome by soaring intellect.

A wordsman from his childhood days, he wrote, and read, and wrote.
As an adult he soon became a poet of some note.

A lion in his own day, but never laureate,
He wrote a style of poetry romantics love to hate.

They called him unpoetic for his language and his themes:
"Real" poets are emotional, besot with love-drenched dreams.

But Pope was educational, satirical, sardonic.
His work to me is, may I say, akin to gin and tonic.

Pope, like Dryden, structuring a poem of narration
Used language that would sound to all like well-bred conversation.

'Twixt Pope and me there'd never be a literary chasm
For we see unrhymed poetry as sex without orgasm.

at Cornell in 1961-62. Professor Read and the six greats spoiled for me the works of many lesser poets.

[See my site, Write Your Book with Me.]