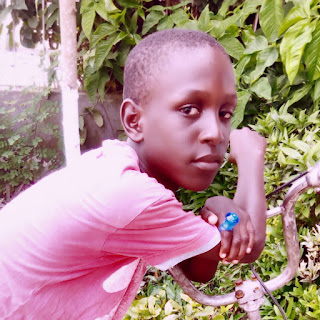 This young man of Ivory Coast nationality, of Baoule origin, lost his parents on his 20th birthday.

Alone against misery and danger, having no one to take care of his life, Nefans was left to save himself: fighting for survival, sleeping in the streets, and eating garbage. Working to no longer be humiliated, seeking to be carried away by his destiny, as directed by his instinct, he found a job being a mechanic.

Sadly, despite his being so talented, they sent him away, leaving him nothing, with no return possible for his food….

Until the day he met a woman, Bea, who helped him to clean his garden, to tend it until it was self-sufficient. Bea loved him, and she helped Nefans to afford a renowned education to improve his own life. It was difficult in the beginning, but he applied himself, managed to control his actions and focus his thoughts of making a success of his life.

Nefans understood that life was not a game, but a struggle for his life and his future, and so he let himself be guided by Bea.

Bea was feeding him, doing everything for him. She was a humane woman, a woman who loved others, a humanitarian lady, and she decided to adopt Nefans. More, she dedicated herself to him, and dedicated all her assets to help this abandoned child, a child who did not want to be born in this kind of situation, a child who wanted to be born just like all other children, in a noble family or even a modest one, but just to have a family, with siblings, a father and a mother, just a family.

Being alone and nobody, Nefans’s meeting of his destiny with Bea gave him a chance of survival, this humanitarian act from a very admirable woman, Bea. So, Nefans loved Bea back with a love far more than platonic; they had become inseparable, a family.

Appreciating Nefans, Bea decided to help him obtain an education, then to be respected in society, so she enabled Nefans to enroll in school, and she took care of him…and he took care of her.

The times of his difficulties that had preceded did not help Nefans, and breaking into society was not easy for him ... Difficult it was for him, in the first moments of his studies, but with time and his perseverance, he succeeded.

Nefans learned that to advance in this world, he would have to persevere with audacity and determination. Once Nefans understood this, he proceeded to consider the choices open to him.

Brilliant, Nefans opted for a scholarship to go to Canada, to Montreal St-Eustache. Bea gave him her full blessing to achieve his most important goals, and she prayed for him, that luck would be with him, after all his years of suffering.

Nefans obtained his scholarship. In going to Canada, to a Canadian university, to study law, his main goal was to have a place in the bosom of the greatest intellectual center of law in the world of law....

It was not easy in the beginning for Nefans, knowing practically no one and being for the first time in Canada, and being in a Canadian University, in the White state in  which it was located.
He was polite and gracious with others, discreet, tried not to be noticed, but for his competition he had a bright and beautiful Canadian woman, Nicole, from a wealthy family, who also attended the University. She was watching Nefans, knowing that he was the first Black to be at the college.

His determination assisted him to become the most brilliant in his section, in biology, where he beat almost everyone, but was only on par with Nicole, the young and beautiful lady of the wealthy family.

The two clashed at a court of rights, for a humanitarian conference,  Refugee Children and the Unnoticed Poor.

Nefans knew that if he committed himself to a good defense fight, he would lose, because Nicole knew completely the courses and the sources. But  Nefans responded to her arguments, democrat that he was, speaking about his own life and experiences. Nefans dramatized his own life, not being embarrassed to tell it, and this made him a total success, even showing the judicial court his tears.

Since then, Nefans became a learned scholar in the world of law, his dream became a reality, bringing his adoptive mother Bea to Canada.

Nefans had succeeded in his studies, with honors, as he loved understanding the nature of the world, and enjoyed being correctly educated. He became an associate at the Faculty of Law at the University of Cocody, after 7 years. He had achieved this after many years of suffering and bitterness.

Nefans and Bea ended up having overcome the worst of the worst.

In this story, we see the miracle of God, Who propelled Nefans into a world of wisdom and zealous spirit.  Nefans succeeded professionally, married Nicole, and had beautiful children, all through the grace of God.
“God in his love helps those in extreme need,” says Nefans in gratitude.

Edited by me (DWC) from a manuscript provided by a humanitarian activist writer with the pen name P.C./F.D.