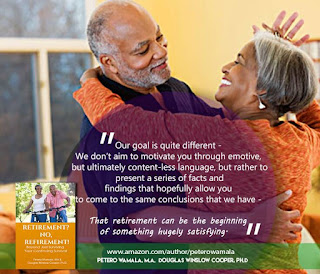 They watched the group for the next twenty-three years, concerned with one main factor: survivability.  And the result was clear: positive stereotyping of retirement, health, and work correlate with a significantly longer life expectancy. Those with a positive outlook on retirement lived an average of 4.5 years more compared to their negative counterparts. This could inversely show us the harms of the negative stereotyping of these events, which the researchers found to be surprisingly prevalent.

And that, in its own way, highlights one of the greatest problem of attitudes - we don’t necessarily know what are attitudes really are until we’re confronted with a hurdle that forces them to come into play.

Are we winding down? Or is this your first real chance?
Compare the following.

In his excellent book Why Zebras Don’t Get Ulcers, Robert Sapolsky explains the facts of the title in this way: zebras’ stress response fires when there is a life-threatening stimulus and then promptly returns to normal when the environment is safe again. Humans don’t function in this way; we carry our stress with us, mulling over the nuanced meaning of gestures and planning hypothetical re-plays of bygone conversations. This gives us an edge; the stress gives us a virtual playground to try out new strategies.

But then there’s the drawback: ulcers. Some are caused by chronic stress, even if it’s of a lower intensity.

You have been engaged. You have been under pressure, the pressure to perform, the pressure to improve - the pressure to know your environment, your opportunities, your enemies, even as they shift in front of you. You have soaked in more information than you could ever use - not just from training textbooks, but expressions, body language, the tones of voices - sharpening your senses to know friend from foe, to calculate risk and contemplate reward.

In other words, you have been on a treadmill of sorts.

The treadmill has stopped.
It’s only natural to continue to keep an ear to the ground regarding the company and industry you have just escaped.

Channel your inner zebra. Give yourself a break.

“You have to let go of the apple cart to eat the apple.”
Terry Elston

It’s also worth noting that one sacrifice you are making in the transition into retirement is a part of you - your work-identity.
Work has provided you with a countless number of things. It gave you your status, fed your children (whilst giving you an escape from them.); it gave you a team; it gave you goals; it recognised you; it rewarded you.
It literally woke you up in the morning.

You have to strengthen the other areas of your life that provide you with these things....

Finding a Space for You

When we say ‘space,’ we don’t necessarily mean something physical, although that can’t be neglected - we mean headspace, a certain calm that allows you to think, or just observe what your brain does in the silence.

It might even be an idea to go on a retreat of sorts, in whichever way is meaningful to you. There are Buddhist retreats that practice absolute silence for weeks at a time, and that’s an option that may apply to some - but perhaps it needn’t be so extreme and elaborate.

Perhaps all you need is to take yourself to a seaside town and walk on a beach.

I’ve had an experience I’d like to share - although recreating it here in writing surely isn’t as powerful as feeling it with your own hands, as I did.
I have a casual interest in card tricks. I enjoy them as food for thought, but I’ve accepted that my hands are too clumsy to do anything truly fancy with a pack of cards. I had often wondered if it were physically possible to shuffle cards perfectly: as in, taking deck A and deck B, shuffling in such a way that the cards become a consistent A-B-A-B throughout the deck, without one card out of place.

That morning, after thinking about it, I reasoned that such a thing was impossible. And if only to confirm my hunch I searched out ‘perfect shuffle’ on the Internet.

But then I found out something wonderful - I was wrong!
My doubts were wrong.

It turns out there’s the Faro Shuffle, which allows you to shuffle cards with a perfectly consistent split by some quirk of rubbing the corners of two decks together. I can’t explain why it works, but it does.

So, within one day, I went from reasoning that something was impossible, to seeing it happen within my own hands. Having this event play out in my very own hands informs my optimism, or my mistrust of pessimism in general.

You can’t learn a language?

Go out and prove it.

Because you might find that you prove yourself wrong.

“Do you want to know who you are? Do not ask. Act! Action will delineate and define you.”
Thomas Jefferson

Sam moved to England with his two children. He worked a taxi driver, but he himself would walk a mile if it saved him a dollar; and it’s an important aspect of the story - that he really did work and he really did save - but it’s that Sam began to use this fact in a nagging way.

Sam reminded his kids on any occasion he could that it was his hard work that made it possible for them all to move to England, which gave them both the lives they have taken for granted.

The cultural background of Sam’s country has given him a couple of expectations: firstly, that the old should be respected and thanked for their sacrifices, and also, (unlike in the West where to an extent we never really cut the umbilical cord, at least financially), that one’s children are supposed to support you financially despite any struggles they may be having.

The problem was that Sam’s daughter married a Westerner, who has a very different idea of things; her husband believes parents should always support their children late into life, and that respect has to be earned, or at least explained. These expectations have led to his children, far more Westernized than he himself, disappointing and offending him; and the only subject of conversation with his daughter is to complain about the son, and vice versa.

Sam has difficulties communicating with this Westerner, and feels disconnected from his own grandchildren, as he speaks very poor English, despite living in England for over half of his life. Once in a blue moon, he will dig out his old grammar textbooks, learn some incredibly advanced vocabulary that he can hardly pronounce, which only gets people at the dinner table scratching their heads.

In some of these moments he even says to his children: ‘God, they don’t even understand their own language!’[1]


Doug retired at 58, much earlier than he expected. With a Ph.D. in engineering, he worked almost three decades, primarily in environmental sciences. The last company he worked for was bought by a conglomerate with a different vision for the company and less need for him. His younger son was graduating from the local high school and would be leaving to go to college. His beloved wife of 16 years, Tina, was bedridden due to multiple sclerosis (MS), and likely to decline further, as she did (she became quadriplegic).

At 58, Doug looked for technical jobs in the area where he lived and also 50 miles away, where his elderly mother and his sister lived. No luck. He and his wife decided to sell their home and get one near his mother, costing about 1/3 less, putting the savings into investment bonds and a stock market index fund. They bought a house with many rooms, to have space for his mother and/or sister and for overnight stays by hired medical assistants. The house was in a rural setting, which made it less expensive, but increased the difficulty of reaching needed services and left them without the people who had been their friends. (They ended up having his mother, who became bedridden at 93, stay with him and Tina for five years before his mother died.)

Four years after Doug’s retirement, Tina had an MS attack that left her quadriplegic, on a ventilator, needing around-the-clock skilled nursing care at home, at an annual cost of four times what Doug’s salary was right before he retired.

How did they handle the medical costs? While he was working for IBM for a decade, he was able to get a long-term-care insurance policy for himself and his wife, during an open-enrolment period, during which period the insurance company had to accept all applicants. Doug and Tina were candid about her condition, which at the time of enrolment involved minimal symptoms, but had the prospect of worsening. Doug chose to work at IBM because they needed his skills and because he thought they would be generous if Tina needed expensive medical care in the future, and they have been, already spending five times what he earned with them during his ten years. IBM has covered 13 years of this care.

What did Doug do to fill his retirement time? Perhaps 25% of it was spent in managing Tina’s nursing care and handling the financial complications, as he took over from the temporary nursing help agency soon after Tina returned from the hospital’s critical care unit. He got involved with the Internet, and ten years after retirement wrote his first book, Ting and I: A Memoir of Love, Courage, and Devotion. He sold a few hundred copies and gave away about an equal number. He then established a small business helping others write their books. The business brought in a few per cent of their income, but provided many opportunities to interact with people Doug found interesting. Having once been a professor at Harvard University, Doug also looked into part-time teaching jobs, but no one hired him, possibly finding him too old, too male, or too White. Fortunately, their savings meant that he did not have to take a paying job.

About 1 in 6 of American adults now provide some form of unpaid care to another person. A couple in retirement will often find one of its members needing care. It is wise to plan ahead for this. Savings, insurance, integration with family members and the community may be needed to handle the medical challenges so often accompanying retirement. Although Tina’s paraplegia, and then quadriplegia, made it too difficult to affiliate with a church, this would be a good option for a less handicapped individual. Doug obtained some of his social contacts by joining the local Chamber of Commerce. Overall, he has been delighted to be married to Tina and has found his retirement to be at least satisfactory. She has generally expressed being content despite her disability.

As they sat together on their porch ten years after Tina became quadriplegic, they both agreed that if that day were to be their last, it had all been worth it. Or, as her father said in a toast at their interracial wedding, which he had originally opposed, “Love conquers all.”

The Question:
[1] On a separate, but related note, I once met a man who married and divorced a Japanese woman who raised his two sons to speak only Japanese. He saw them only on weekends. I’ll never forget that ashamed, vulnerable expression as he explained to me that he couldn’t converse a single word with his own son because he ‘couldn’t learn the language.’! Sometimes excuses fail to excuse anything.