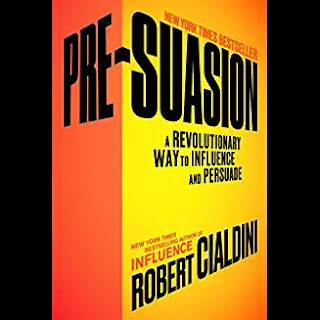 “You never get a second chance to make a good first impression” we’ve been advised. Turns out that making a first impression, your opening line or gambit in persuasion, greatly influences the response of the “target” to what follows.

Author Robert Cialdini doesn’t give this example, but I will: if you talk about capital punishment or about foreign orphans, your listener will give you a very different answer if asked later to spell “euthanasia” (“youth in Asia”). We pay attention to what we are set up to expect.

Dr. Cialdini gives many examples of experimental results showing the influence of the preambles to questions and to attempts to influence. Sofa or mattress ads with backgrounds of clouds get buyers to emphasis comfort than cost and pay more than do ads with backgrounds of coins…for the same set of product options. The texts were the same, but the illustrations were the sub-texts. Many other examples are given, and often the respondents were still influenced weeks later even when having forgotten seeing the ads at all.

Exceptionally well documented, the book is half narrative and half references and notes.

Reciprocation: If someone does something for us, we feel obligated to do a favor in return. Not only does he present studies to show this, he tells how he fell prey himself. Gifts that are meaningful, unexpected, and customized for the recipient are particularly effective.

Liking: Salespeople are urged to try to get their prospects to like them. They are told to dress well, be pleasant, friendly, joke a bit, emphasize commonalities, and provide compliments. Some politicians are careful even to imitate the speaking patterns of their audiences around the country.

Social Proof: Follow the crowd. I recall there was a play and a song with the title “50 Million Frenchmen Can’t Be Wrong.” This was an appeal to “social proof,” one more effectively, probably, for the French than for the Americans. Still, polls get rapt attention by many, and we are influenced by the preferences of others, sometimes appropriately so.

Authority: If someone who should know shares that expertise, we are inclined to believe it. Expert opinion is quite persuasive…until contradicted by another expert. Your position on man-made global warming will be strongly influenced by which experts to whom you give credence. Particularly persuasive are those who admit their imperfections up front, then make their points definitively. Cialdini shows how Warren Buffett has mastered this.

Scarcity: “Get it while it’s hot” and “only a few left” and “only x per customer” are variants of the appeal to FOMO, Fear of Missing Out. The perceived values of many things depend in part on utility and scarcity: water in the desert versus at the lake.

Consistency: We like to think of ourselves as consistent, despite Ralph Waldo Emerson’s warning against “a foolish consistency….” It is a virtue of sorts. Mall-goers asked whether they would sample a new soda flavor agreed much more often when the request was preceded by asking them whether they were adventurous. Most said they were, and most then sampled the new drink, in contrast to what happened when there was no introductory, pre-suasion, question.

These first six were important parts of Cialdini’s earlier book, Influence. Subsequently, he has come to add a seventh principal factor of influence: the idea that some others are not merely like us, but are of us, he terms this

Unity: how we feel about a family member, such as a sibling, as opposed to how we value a friend or colleague. It is not just DNA, although race and ethnicity are often in this category, but some other associations sometimes carry this weight: gender, age, political and religious affiliations. You know it when you feel it: “this person is one of Us.” Much stronger than “like us.” One distinguishing element is that the conduct of one of the members affects the self-esteem of the others, “we is the shared me.” Actual kinship and occupying the same place are two elements that can lead to this feeling, as can moving together, acting together, for example in celebration. Dancing, too?

This fascinating book has a wealth of ideas that will make you more aware of the factors that influence you and prepare you to be more skilled when you seek to influence others.

P.S. If you'd like to finish and publish your own book,
see my WRITE YOUR BOOK WITH ME
Posted by Douglas Winslow Cooper, Ph.D. at 11:21 AM